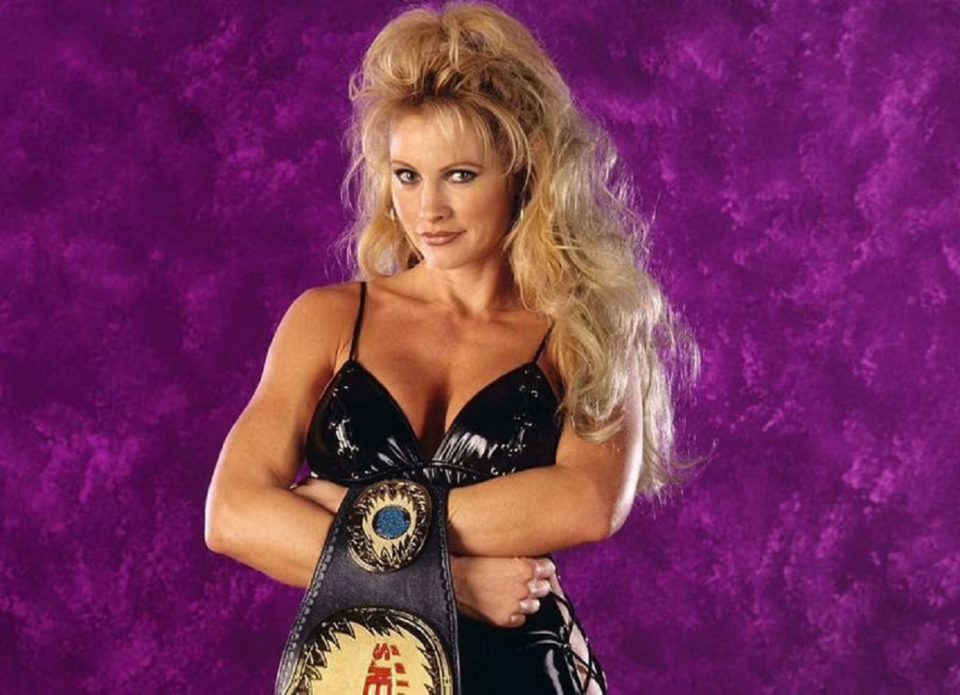 Sable wrestler who was born as Rena Greek, is mostly dubbed the old-school sex symbol of WWE. Sable defined what it means to be a woman in the harsh world of WWE,” according to her profile as a former WWE alum. In other words, she became a pioneer woman in the world of wrestling.

In those days, this industry had the fewest options available to female fighters, but she seemed to be the one exception that the public would die to see. It’s easy – using her sexiness quotient, she could hypnotize anyone!

1. Sable used to be Brock’s valet:

Playing a valet role, Sable made her WWF debut in 1996 and viewers couldn’t help but notice this new face who already realized she was going to be a gem. There, she used to serve as a pretty face clinging to Brock Lesnar’s arm and thus serving as his valet between bouts, just like she did for her ex-husband Marc Mero in the ’90s. Rena Greek aka Sable served for the show, pulling television audiences like no one and thus becoming the original WWE Diva.

Although Sable used to be the face of the women’s division back in the Attitude Era having her own identity, she chose to go back to her valet days, later in her career.

2. She had her own style and identity:

Rena Greek aka Sable was born in Jacksonville. She proved himself from a young age in various activities such as gymnastics, horseback riding, and softball. After winning her first beauty pageant at the age of 12, Rena Greek began a modeling career, working with brands such as Pepsi, L”Oréal, and Guess.

The WWE Diva frequently came out in spandex one-piece outfits and was an absolute success in entertaining audiences, through her bravery and charisma.

But more importantly, Sable also became the Women’s Champion in a reign that lasted about six months. She was also on the cover of Playboy three times with the 1999 issue being one of the best-selling of all time.

According to her WWE profile, she “taunted her opponents with ‘the grind,’ a move reminiscent of ‘Ravishing’ Rick Rude where she turned her hips.”

Her ex-husband, Marc Mero spoke to Wrestling Inc. and said of Sable: “She was amazing, you never know how someone will do it in front of the camera, and she was amazing and she was one of the main characters in the age of attitude.”

3. Before that she used to be Triple H’s valet:

Making her debut in 1996, Sable accompanied “Triple H to the ring at WrestleMania XII,” according to WWE. Then she began working for WWE in 1996, being one of the company’s first female wrestlers, where she soon gained great popularity. Sable became the second women’s champion reinstated to WWE since WWF after her rivalry with Luna Vachon and Jacqueline.

4. Sable’s early love life was tragic and then she assaulted her second husband:

Sable was married to a man named Wayne Richardson before she would enter the world of wrestling. They were married in 1986 and together they had a daughter named Maraiah. Tragically, Richardson died in a drunk driving accident in 1991.

Just 3 years after Wayne Richardson’s death, Sable married “Wildman” Marc Mero and they were together for 10 years. When Mero was sidelined due to a knee injury, his wife even substituted his place in the WWE spotlight and this was a bad thing as Mero reportedly grew increasingly jealous of his wife’s success when he returned.

The dispute between them actually turned physical, according to WWE, with “Sable delivering a kick to the groin and a power bomb (which she called the ‘Sable bomb’) to Mero.”

After that assault, Mero (who wanted to divorce her immediately) opened up about his deterioration on The Steve Austin Show where he spoke about rumors that Sable cheated on him with Brock Lesnar. While Mero was initially heartbroken, the pro-wrestler has since let him go and seems happy for his ex-wife and new husband.

“You can’t sleep, you can’t eat, you’re sweating,” Mero recalled. “And I remember thinking, ‘When I find out who this guy is, I’m going to tar this man!’ And then I found out it was Brock Lesnar! Steve, this gives forgiveness a whole new meaning! Our marriage was over. We ended up getting divorced, but God bless them! They married. They have children.

The funny thing is that Sable debuted at WrestleMania XII, in March 1996, as the manager of Hunter Hearst Helmsley. The first major angle for Sable was her actual engagement to fellow wrestler Marc Mero, who debuted at WrestleMania XII. The storyline began when Marc Mero spotted Sable being mistreated by Helmsley backstage, so Marc Mero jumped to the female fighter’s defense, thus anointing himself her new manager. Mero managed his teammate until her injury in 1997.

Sable and Brock Lesnar began dating in 2004 but their new relationship got off to a rocky start. Here’s why: History and patterns keep repeating.

We’re sure something got on Sable’s nerves and they actually called off their engagement in 2005. While Sable made some changes in her romantic life, she went right back to Brock and got engaged again in January 2006 and married in May of that year. They had a ten year gap in age but Sable was in her late 30’s and went on to have two sons, Turk and Duke.

Marlette Rena Lesnar aka Rena Mero debuted under the name Sable at WrestleMania XII, in March 1996, as the manager of Hunter Hearst Helmsley, who faced The Ultimate Warrior, in this same great event. Her ex-husband Mero managed her till she returned in 1998.

In her next story, a returning Marc Mero (aka “wonderful” Mero Marc) became jealous, refused to let any of the spotlights be on Sable, and mistreated her. The duo entered into a feud with Luna Vachon and Goldust, culminating in a match at WrestleMania XIV in March 1998. Sable superkicked Goldust and executed a “Sable Bomb” on Luna, also delivered a technical knockout and covered to the latter to end the fight. At Unforgiven in April 1998, Sable lost to Vachon in an Evening Gown Match, after being distracted by Marc Mero.

Sable came to the ring after Marc’s intervention in Unforgiven and challenged him to a fight. She then kicked him and did the Sable bomb move, as a sign of revenge. Sable finally separated from Marc Mero but Jacqueline debuted, who served as Marc’s new manager, this resulted in a rivalry between the two. In July 1998 Sable went head to head with Jacqueline in a Bikini Contest Match, meanwhile Sable only used prints of painted hands on her bare breasts, winning the contest. The following night on RAW, Sable was disqualified by Vince McMahon as she did not actually wear a bikini. Thus, Jacqueline attained the legitimate victory. In SummerSlam, Sable alongside Edge (who was his secret partner), defeated Marc Mero and Jacqueline in a Mixed Tag Team Match.

On September 21, 1998, on Raw, Sable, and Jacqueline faced off for the newly rejoined WWE Women’s Championship. After Marc Mero interfered on her behalf Jacqueline took the title. On November 15, 1998, at Survivor Series, Sable won the women’s championship after a Sable bomb on Mero and Jacqueline. During this time, Rena had a guest appearance on an episode of Pacific Blue. Sable briefly participated in a storyline in which she was forced to play a role as Vince and Shane McMahon’s subordinate, however, the story was cut short.

Sable was attacked by a masked woman named Spider Lady in 1999 as part of a new storyline. Spider Lady turned out to be Luna Vachon. Sable faced Vachon in a Strap Match at the Royal Rumble PPV and would win thanks to Shawn Michaels interfering with her favor.

7. Her playboy cover helped turn things around for her career:

Tori’s debut could be spun into a change in Sable’s personality and Sable hit it out of the park as the cover girl for the April 1999 issue of Playboy.

The magazine would become one of the most purchased in the history of the brand.

Around the magazine’s release, Sable switched to Heel “for going to Hollywood ” and having a big ego. On rare occasions Sable would defend the championship, continually berating Tori, who was her fan, and fighting with Luna (who had switched to Face ). Sable released her new slogan: “This is for all the women who want to be like me, and for all the men who come to see me”, the phrase was accompanied by Grinding.

The feud with Tori was carried up to a match at WrestleMania XV and during the match Nicole Bass debuted as Sable’s bodyguard which helped her win the match.

Sable kept directing Nicole Bass and Sable remained champion for almost 6 months, but on May 10, 1999, Debra “won” the WWF Women’s Championship against Sable, in an evening dress match. Off-screen, Sable was in a legal dispute with the WWF, so the WWF decided that it would strip her of the championship in this segment.

After both leaving the company and injuring her heel, Sable cited allegations of sexual harassment and unsafe working conditions. The female wrestler filed a $110 million lawsuit against the company.

This was in June 1999 and it is claimed that she filed the lawsuit after refusing to go topless. During the course of the lawsuit, Vince McMahon counter-sued Sable whose real name is Rena Greek over control of the stage name “Sable.”

Rena reduced the amount she was seeking in damages, and they were finally settled out of court in August 1999. Rena would later use her real name to reappear in Playboy magazine, becoming the only woman to get two covers for the magazine the same year.

9. After her departure from WWF, she found other ways to keep her career going:

Sable made an appearance as a member of the public onNitro World Championship Wrestling. During this time, Sable aka Rena Greek made appearances on Late Night with Conan O’Brien and The Howard Stern Show. She also made appearances on television shows such as Relic Hunter and First Wave, in addition to appearing in the films Corky Romano (where he played a gorilla) and Ariana’s Quest.

She released her autobiography, titled Undefeated in August 2000.

She also released a comic titled The 10th Muse, starring herself as a superhero.

In May 2001, she was awarded an advice column on CompuServe.

Sable also acted in many television series, including Pacific Blue.

Sable and Brock Lesnar both have one thing in common and that is that they are very private people. After leaving WWE in 2004, they both entered New Japan Pro Wrestling in 2006.

On August 10, 2004, the official WWE website announced that Rena Marlette Greek known as “Sable” had been released from the company, Rena alleged that she left the company to spend more time with her family.

The Most Important Factors in Choosing an Online Casino