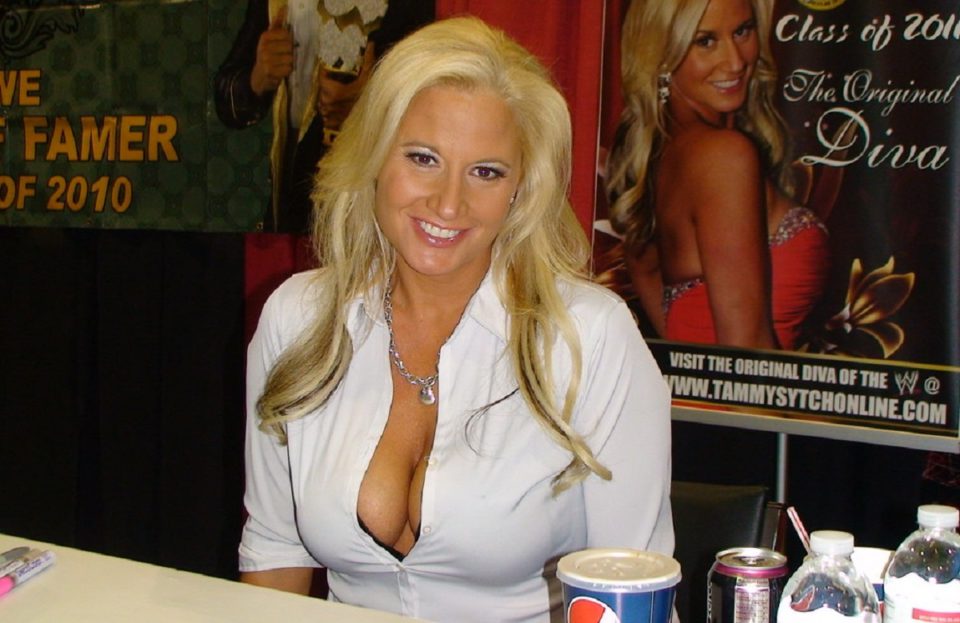 Tammy Lynn Sytch, known by her ring name of “Sunny”, is one of the most popular female pro wrestlers of all time. She was a true path breaker. At a time when women in pro wrestling mainly served the roles of valets and managers, Tammy Sytch (Sunny) broke the mold and was an active in ring performer as well. She also managed numerous wrestlers such as Lex Luger, Chris Candido, Bam Bam Bigelow, Ron Simmons (Farooq), and the Legion of Doom tag team (Road Warrior Hawk and Road Warrior Animal). After a successful career in pro wrestling, Tammy Sytch also had a successful career in porn. However, things went really south after that as she was arrested for contempt, breaking a restraining order and trying to escape the police. In this post, we will find out more about her roller coaster life. Let’s get started.

What happened to Tammy Sytch?

Life can take many turns and it is known that touching the sky does not mean that one cannot then descend, sometimes in a noisy way, to a much less friendly place. There are many chronicles about the rise to the top and subsequent fall of some stars, who went from swimming in abundance, fame and success to having very serious financial, legal or personal problems.

The arrest and consequent imprisonment of Tammy Lynn Sytch, a former WWE wrestler who under the stage name ‘Sunny’, triumphed throughout the 90s on the professional wrestling circuits, first fighting in the rings. and later as an industry commentator, manager and media star.

Sytch is considered the first great WWE Diva, is part of the company’s Hall of Fame and in 1996 was the most downloaded celebrity on the Internet. Until the arrival of the buxom Sable, Sunny was the undisputed number one woman in the WWE. However, Sable’s arrival resulted in Sunny’s popularity fading a little bit.

However, the ex-wrestler has been facing problems with the law since 2012. And the last of them has taken her straight to prison.

Tammy Sytch was discovered by Jim Cornette at Smokey Mountain and she started her wrestling career with her boyfriend (at that time) Chris Candido.

In 2009, she made an appearance at Wrestlemania XXV during the 25-diva royal match, which was her first professional match at the company. In 2011 she was inducted into the ‘Hall of Fame’ and recognized as the ‘Original Diva’ of WWE (which mixes beauty with technical skill).

In some statements made in the past to WWE, in which she reflected on her career, Sytch defined her achievements in these terms, achievements that today seem to have been clouded in part by her problems with the law: “The girls who came before me, they were one-dimensional, and when I appeared, I could do everything. I could get in the ring and compete, I could manage, present television and radio programs, model … I was number one. “

Tammy Sytch (Sunny) also had a highly publicized relationship with WWE legend Shawn Michaels and the couple was known to do “interesting things” in the locker room. Unfortunately, Sunny did all this while she was still dating Chris Candido.

Why was Tammy Sytch arrested?

As reported by Fox News, Sytch was arrested a few days ago in New Jersey on charges of contempt of authority, trying to “elude” a police officer, driving with a suspended license (for the second time) and skipping a restraining order for domestic violence.

The American was on probation after having already been in prison a few months ago, in Pennsylvania, after being convicted of driving under the influence of alcohol. Then she was imprisoned for only two days, but things could get complicated for her. On this occasion, she had been arrested in Monmouth County and entered directly into the region’s correctional center. Beyond these data, the details and specific details of his situation are still unknown.

Tammy Sytch also used to (allegedly) supply a lot of painkillers and other drugs to wrestlers during her time at the WWE.

Sunny is also notorious for allegedly faking cancer and starting a GoFundMe page for it. Mysteriously, she claimed to recover completely from cancer. Edge and Christian mocked this entire incident on the WWE network.

Does Tammy Sytch have an OnlyFans page?

Tammy Lynn Sytch, or better known as Sunny is the former WWE star who has discovered a significant source of income in recent times.

The beloved Sunny, who was inducted into the WWE Hall Of Fame in 2011, has captured the attention of some media (actually only a couple of blogs equal or more ordinary than this one), due to the economic efforts they have made in enhancing her personal wealth

To sum it up, it is a virtual platform where followers pay to access uncensored photographic or audiovisual material that the former WWE star decides to market, or any type of person with a certain media pull.

How much money does Tammy Sytch make with her OnlyFans account?

Considering the subscription prices, the platform’s 20% discount, and the number of subscribers Sunny has… she would be making quite a bit of money.

An empire that continues to rise

However, that was the estimated earnings at the time when the former WWE star had about 800 followers on the platform. In that period of time, her followers have already grown to over 2000. Going by the subscription charges, Tammy Sytch must be earning close to half a million dollars per year now.

How to get success through OnlyFans?

Apparently, after conducting an arduous study on those who obtain monetary success on said platform, we leave the main points that must be met:

-Have an appearance that is to the taste of a wide sector of the public.

-Have hundreds to thousands of followers.

– Be well endowed or have some degree of mastery in the arts of lovemaking.

Is Tammy Sytch selling her WWE Hall Of Fame ring?

Being a member of the WWE Hall of Fame is an achievement for every wrestler in the company. However, for certain people, profit is more important than the honor of being in wrestling history.

This is the case of Sunny (Tammy Sytch), who will auction her ring on the internet. According to the TMZ news portal, the ex-diva wants to leave behind her legacy as a WWE star. “It’s time to let go of the past and by selling my ring I will,” she said.

Sunny (Tammy Sytch) was inducted into the WWE Hall of Fame in 2011 and received a ring to commemorate the moment. FIve years after her induction, Sunny put her Hall Of Ring for auction at a base price of $3,000. She was doing that because she was facing some financial difficulties as well.

The Most Important Factors in Choosing an Online Casino