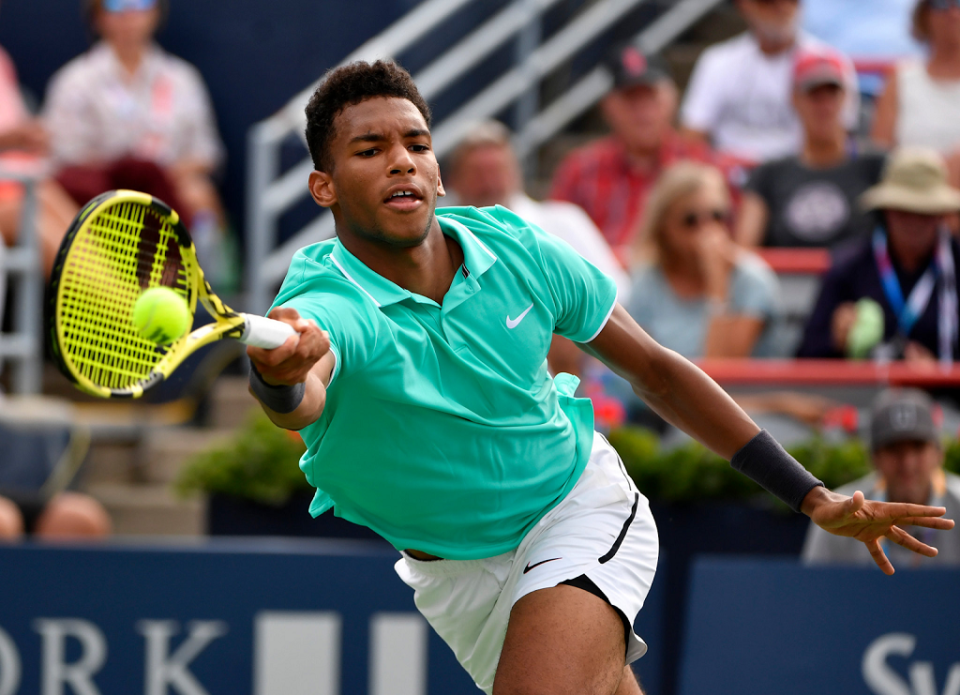 Felix Auger-Aliassime is a rising tennis star from Canada. He is of Togolese descent. After starting tennis at a very young age, Felix Auger-Aliassime made a name for himself on the junior circuit and won some titles on the ATP Challenger tour as well. He currently holds a career high ranking of 15th on the ATP tour and with fellow Canadian Denis Shapovalov, is considered as one of the future tennis stars to watch. The whole world took notice of Felix Auger-Aliassime when he shocked tennis legend Roger Federer during the 2021 edition of the prestigious Halle Open (one of the premier events of the grass court season). Let’s find out more about him.

Felix Auger-Aliassime: All You Need to Know

When was Felix Auger-Aliassime born?

Felix Auger-Aliassime was born in Montreal on August 8th, 2000. He has said that watching Jo Wilfred Tsonga play inspired him to pick up tennis as he was one of the few dominant black tennis players on the tour at that time.

“I had fun playing. It’s still true and I’m happy, because to be successful you have to have fun when you embark on a field. It’s something that my parents introduced from a young age.”

In 2012, he won the Open Super 12 in Aurey, France, a sort of world championship for 12 years and months. Before him, Rafael Nadal, Andy Murray and Gael Monfils also won.

This association with the greats of tennis, Felix took it as a source of motivation. “It proves to me that I’m on the right path, that it is possible and that I just have to work hard,” he said, dismissing the idea that it was adding pressure to him.

When he was a 14 year old tennis prodigy in Quebec, he was asked about if he still had fun while playing tennis, this is what he said: “I meet young people who no longer have as much fun because it becomes too serious. It’s almost done. At 14, me, it is not yet the case. I want to keep playing for my own pleasure. I don’t play for my coach or for my father.” An interesting fact about the 14 year old Felix Auger-Aliassime was that he was already a towering 6’1” at that age.

His father made sure that his son kept his feet on the ground. He didn’t want Felix to grant too many interviews, fearing distractions. Speaking on the matter, his father said: “He didn’t win anything. And I told him. It is very important that he remains focused in his development. Since he was six years old he has wanted to play at Wimbledon or win Roland Garros. What scares me is that he is distracted, that he is distracted, that he leaves his way. But for the moment it is being done very well. “

“My father pushed us a lot when we were young, my brother and me. But me, it suited me less. I preferred to socialize, to see my friends. But once that period had passed, it was I who always asked for more, ”says Malika, reigning double champion of the Louis-Després tournament, which unofficially makes her the best racquet in the Quebec region. “It’s been a tough few years, but I’m glad I got through it.”

Things have changed a lot since then and Mallika thrives on competition today, always striving to be better than what she was yesterday. This drive has helped her recover from injuries sustained as a result of rapid growth. Because she shot up rapidly, she suffered injuries to her back, shoulder, and knee. These injuries created hurdles in her growth as a tennis player.

Even though she has been successful on her own, she has always been overshadowed by her brother’s success. However, she has taken it positively.  “It has always motivated me and it has never bothered me. I am not initially a jealous person. His success, he fully deserves it. I can just be proud of him, ”she said.

What did Felix Auger-Aliassime say about his performance at Wimbledon?

“Physically, I felt a lot better than in Australia ,” he explained. Against Karatsev, I couldn’t move at the end. I was really struggling. ”Well in his body and in his head against Zverev, he did not hesitate to move forward during the denouement. ” I was brave, daring, trying things and releasing my punches. ”Perhaps, also, thanks to the contribution of Toni Nadal on the management of the important moments and the famous“ mentality of champion ”sought. While he lost to eventual Wimbledon finalist Matteo Berretini, he still performed quite well. Even though he didn’t go as far as he had hoped at Wimbledon, he was able to draw some positives out of his performance.

“ It’s been a good season on grass , definitely,” he said after losing to one of his best friends on the circuit. There are a lot of positives to be learned from this tournament. ”

How much does Felix Auger-Aliassime weigh?

How tall is Felix Auger-Aliassime?

What is Felix Auger-Aliassime’s ATP ranking?

Felix Auger-Aliassime holds a career high ranking of 15th currently. He has had some great successes in his career: He reached the final of the Rio de Janeiro Tournament, eventually losing to Serbian Laslo Djere. He also reached the semifinals in Masters of Miami, losing to the monstrous serve of American John Isner. On March 9, 2019, at the Indian Wells Masters , he defeated a top ten player for the first time, the young Greek phenom Stefanos Tsitsipás , number 10 in the world (at that time). He is yet to win a title on the ATP tour so far, he did win in the ATP Challenger Tour though.

How is Felix Auger-Aliassime contributing to #FAAPointsForChange?

In addition to the mental and physical milestone of reaching his first ever Grand Slam quarterfinal, Felix Auger-Aliassime also collected a lot of points for his #FAAPointsForChange project. From Stuttgart to Wimbledon via Halle, he won 1,155 points. Or $ 5,775 more to help children in the Kara region in Togo. This amount is further bolstered by BNP Paribas as it adds a further $15 to every point won, or $ 17,325 in total. Because of Félix Auger-Aliassime’s continuous contribution, the Educhange program has been growing steadily.