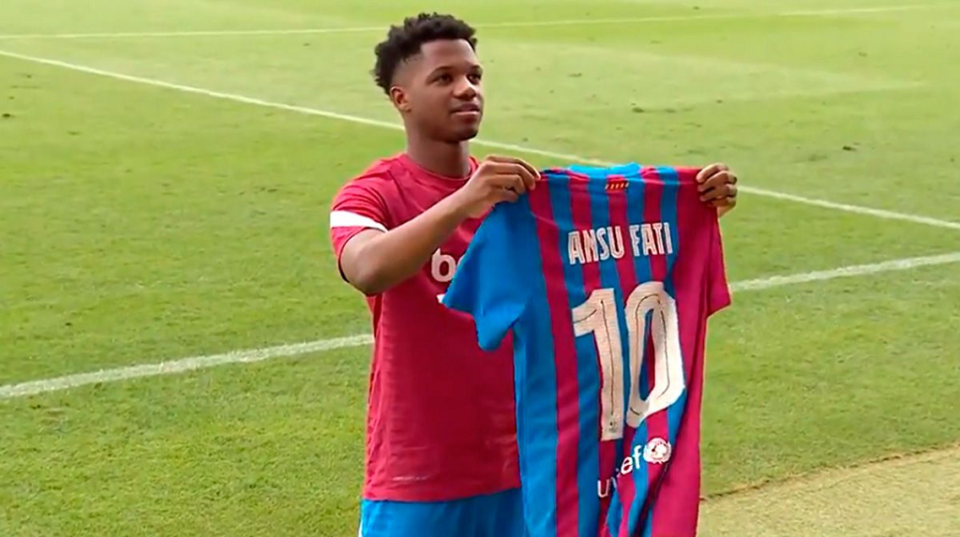 Barcelona supporters know what Ansu Fati is capable of, but in this double round of the UEFA Nations League, by standing out as the best player on the Spanish team and scoring, his name became better known internationally.

A native of Guinea-Bissau, Ansu Fati has lived in Spain since he was six years old. His game has developed at a rapid pace. He is a figure that Barcelona counts upon and he has proven to be a fast winger, with a lot of tricks and skills up his sleeve. Let’s find out more about him.

Ansu Fati was born in Guinea-Bissau and changed his name

The young Anssumane Fati, known as Ansu, arrived in the Sevillian town of Herrera at the age of six. Upon becoming nationalized, he then changed his birth name, Anssumane Fati and added his maternal surname, Vieira. The nickname, Ansu, would come later.

His father, Bori Fati, played second division in Portugal. Without much luck, he returned to his country. But Guinea-Bissau was hard hit by poverty and heard that in Marinaleda, a communist “oasis” in Spain they were helping immigrants. He arrived asking for food and met the mayor, Juan Manuel Sánchez Gordillo (popular on the Spanish left). He was barely able to help him by employing him as his driver. But he made the bridge for a better job in a neighboring town, Herrera, where he settled as a garbage truck driver. Upon settling down, he brought his family to Spain.

Ansu Fati had suitors lining up for him

At an early age, he stood out with the town’s team, Peloteros de Herrera. Sevilla signed him at the age of nine. Real Madrid and Barcelona also arrived at his practice sessions to scout him.

His adaptation to Barcelona was not easy. On December 13, 2015, in a match in the Infantil A (13 years old) against Espanyol, he suffered a serious fracture of the tibia and fibula in his right leg that left him unable to play for ten months. Many thought it was his end, but he came back stronger.

Ansu Fati has smashed many records

Ansu Fati was associated with Real Madrid for a while

After making the leap to fame, a photo of a very young Ansu wearing a shirt with the Real Madrid crest was revealed. It turns out that when he was “separated” from Sevilla, he played with the Real Madrid club “Sextacampeones de Herrera”. In fact, in Herrera, there is a club from Real Madrid and another from Barcelona and although they get along well, they joke about it. On more than one occasion, the president of the Madrid club has appeared on TV programs saying that Ansu was only there to annoy his rivals. In the end, he made it clear that he was joking and wished the boy the best.

Víctor Valdés, the iconic goalkeeper, was his coach at Barcelona Juvenil. He commented on an anecdote from 2019: They went to play a tournament in Russia and the first match did not complete well and had to abandon it due to inconvenience. Valdes looked at Fati’s boots and “they were a mess.” Valdes went with Fati and bought him some new ones.

After rising quickly in the junior ranks, Ansu Fati received Spanish citizenship as expeditiously as possible. The Council of Ministers in Spain approved in September 2019 to grant the nationality and the Spanish passport to the Barcelona striker. Ansu Fati’s case was helped by the requests of the Royal Spanish Football Federation (RFEF) and the Superior Sports Council (CSD). The reason: in October Spain was going to play the U-17 World Cup and Fati was on the list. It was approved on Friday the 20th, just the day the call was due to be delivered to FIFA.

Ansu Fati has been at the receiving end of racist taunts

After Ansu Fati scored a goal for the Spanish National Team, he received a lot of racist hate online as well. Spain doesn’t have a history of featuring many African descent players on its team (unlike countries like France). Some people said hateful things like “I’d rather lose with Spaniards than win with Congolese” after he scored a goal.