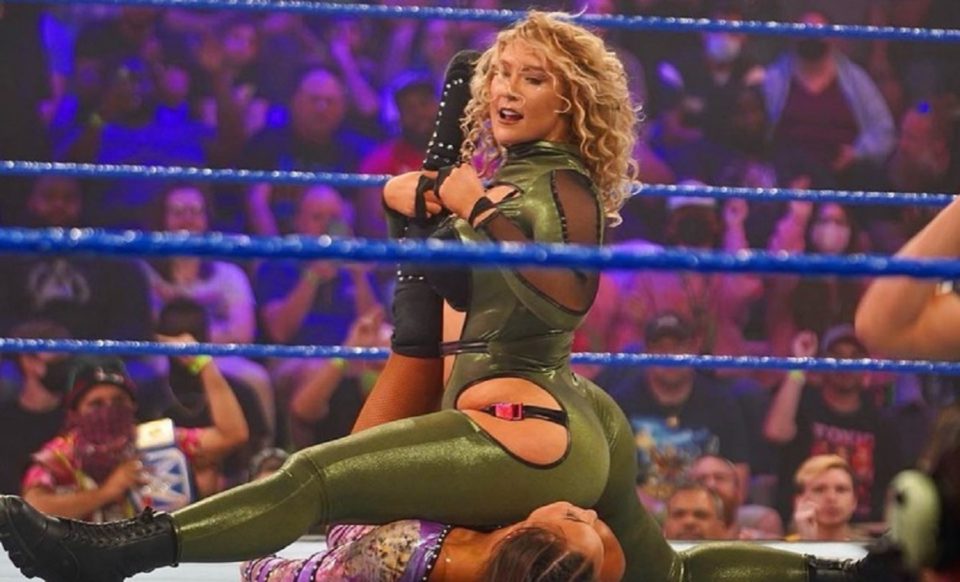 Faith Jefferies aka Nikkita Lyons is just beginning at this stage in wrestling, as the American is a well-known professional fighter, actress, singer, and MMA fitness trainer. WWE NXT’s Nikkita Lyon is known throughout the country due to her professional wrestling skills. She has also competed in many tournaments as a professional wrestler, including Women Of Wrestling. Let’s get to know her life in this list of interesting facts!

Nikkita Lyons: Here Are 10 Lesser-Known Things About The Wrestler!

Without a doubt, since her debut in NXT, Lyons has attracted a lot of attention, so much so that Nikkita tried to give that movement a name but she herself said that the name she wanted to give it was not so PG, which ultimately the WWE didn’t permit.

“I was very surprised honestly,” Lyons said when hearing the buzz surrounding the move. “I thought maybe a little buzz but I was not expecting World Star, I was not expecting that reaction. I was blown away because it’s funny that it really was that pin that went viral. My finisher is the Tornado Kick, I did the split pin and it’s funny because I told the coaches ‘I just want to try this. I don’t know, it might work, it might get over, I don’t know.’ And it did and I was extremely surprised”, she stated during the Out of Character podcast.

While talking of the buzz she’s received, the NXT talent noted that Drake followed her on Instagram, which was a total surprise!

Maybe she can collaborate with him in the future on a music project.

Nikkita’s kicks are not just towards her mortal enemies but also in the air because the NXT fighter has vast experience in Taekwondo, so much so that according to herself, she began practicing them at the age of 4 and a couple of years later she was already an expert with a black belt.

3. Get to know Faith The Lioness on WOW:

Before signing with WWE, Nikkita competed in Women of Wrestling under the ring name Faith The Lioness, where she had a couple of matches and was trained by Selina Majors, known in the world of wrestling as Bambi.

4. Nikkita Lyons is also a singer:

Not only does she stand out in the ring, but she also has a career in music where she has even released songs such as the one above.

5. Nikkita Lyons was a star since childhood:

Nikkita Lyons was born to her parents on the 5th of August 1999 in Las Vegas, Nevada in the United States.

Since she was little she has been linked to fame, as it was known her parents began to take her to cast for commercials from a very young age, participating in some local advertisements since she was 4 years old. During her childhood, she also went to middle school With AEW’s Jungle boy.

Ronda Rousey impresses many WWE fans but it was Nikkita who said that Ronda is undoubtedly one of her greatest inspirations, her UFC fights captivated her and even during her adolescence she had a couple of posters on the wall with the world champion.

In addition to this, Nikkita Lyons has been a social media sensation ever since she made her debut in the company, with fans giving her a number of cheeky nicknames thanks to her unique way of obtaining her Split Leg Pin Fall Finisher!

8. Nikkita Lyons was pulled out from Smackdown taping:

Nikkita Lyons could not participate in WWE SmackDown as the WWE Superstar was not authorized to enter Canada for a medical reason.

During the 2022 SmackDown, Gigi Dolin and Jacy Jayne, the girls of Toxic Attraction, defeated Natalya and Sonya Deville in the quarterfinals of the tournament to decide the new WWE Women’s Tag Team Champions.

Zoey Stark and Nikkita Lyons were the original team that had to face the fighters and thus Dolin and Deville were not originally scheduled and the company announced their appearance at the last moment.

While Stark had suffered an injury and in the last hours, through Dave Meltzer, from Wrestling Observer, Lyons could not participate in the show either, but for a different reason: she was not vaccinated!

Therefore Nikkita Lyons could not enter Canada.” Apparently, WWE did not realize the problem until the last moment!

9. Net worth of Nikkita Lyons:

Nikkita Lyon has income from her careers in wrestling and show business accumulating a net worth that is estimated to be approximately $3-4 million dollars (approx). Lyons also earns money from her paid contributions. Nikkita currently has a variety of expensive cars and resides in a beautiful house in Los Angeles, California.

Nikkita Lyons made her wrestling debut with the hit television show Women Of Wrestling (WOW). She promotes empowerment, self-confidence, and optimism for all women around the world through her wrestling career.

But prior to hitting it off big with WOW, she was a professional dancer and model.

Before entering the wrestling industry was actually a professional choreographer, making it easy to participate in various dance and singing competitions once she got famous. Some examples include TV shows like American Stars for Singing and Dancing where Nikkita Lyons placed on the list of finalists in the Top 10.

Nikkita Lyons has also appeared on shows like One Mo’ Chance: The Reunion, All Kids Count, The Dying Gaul, and others, according to her IMDb bio.

How To Recognize a Safe Online Casino?