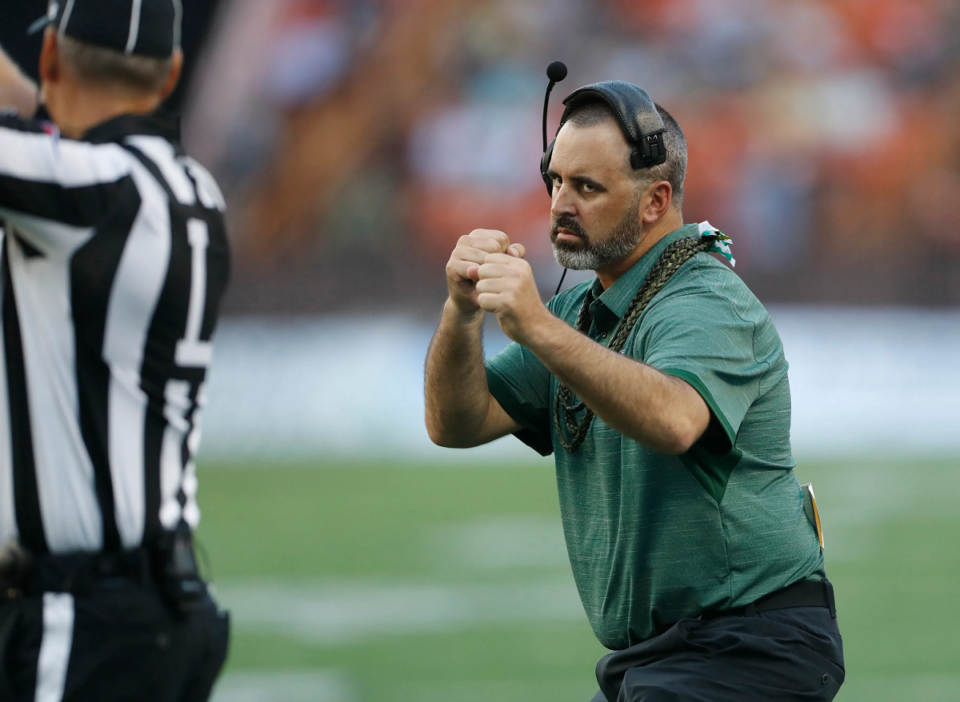 One by one, eleven of the Pac-12 football coaches walked up to the podium without masks on conference media day on Tuesday, each fully vaccinated against the virus that rocked football last season. All the coaches spoke about the advantages of taking the COVID-19 vaccine after the pandemic wreaked havoc all across America and the globe. Over 600,000 thousand Americans have lost their lives and many more have suffered financial losses. Organised sports has also been one of the things that suffered because of that. So once the COVID-19 vaccine became available, it was expected that people associated with organized sports would line up to take the shot. However, Nick Rolovich, Head Coach of the Washington State University has refused to take the vaccine. Let’s find out what happened.

Is Nick Rolovich an anti-vaxxer?

While the above mentioned coaches spoke at length about player safety and personal responsibility from a stage in Hollywood, one of their peers was noticeably absent.

Thousands of miles away in Pullman, Wash., The Pac-12’s only unvaccinated head trainer sat alone in front of a camera, hoping to avoid the subject altogether. Nick Rolovich of Washington state announced last week that he would not be attending media day, where proof of vaccination was required for coaches and players. Rolovich was therefore joined by Zoom instead, his seat empty as his two players answered questions about their choice of coach at the back of the room.

Rolovich declined to explain his decision not to receive the vaccine on Tuesday but said he “wholeheartedly supports” all players who choose to be vaccinated.

“I plan to adhere to all policies that are implemented for the unvaccinated at the state, local, campus and conference levels,” Rolovich said. “I’m not against vaccinations. … I urge everyone to consider getting vaccinated.

What did the Pac-12 commissioner say about the matter?

Pac-12 Commissioner George Kliavkoff urged everyone to get the COVID-19 vaccine but when questioned about Nick Rolovich, he declined to comment anything further than it’s “none of our business”.

Kliavkoff said that vaccination was a private decision and the Pac 12 wasn’t going to mandate anyone’s vaccination.

Are there any vaccination mandates in the WSU?

A warrant will be in place this fall, however, at the Washington state campus, where all students and staff will either need to provide proof of vaccination or request a religious or personal exemption. Eight other Pac-12 schools, including USC and UCLA, have already announced similar requirements. Those granted an exemption still have to wear masks, socially distance themselves and test regularly – all difficult rules to follow as the head coach of a heavily vaccinated team.

Nick Rolovich’s decision to skip the vaccine has resulted in him being at loggerheads with the WSU. Politics seem to have put Rolovich at odds with his own university’s policy regarding vaccination. Shortly after announcing his decision on Twitter last week, Washington State President Kirk Schulz said the university “has an obligation to serve the public good and promote health and safety. of its communities ”.

Asked what the university thought of his decision, Rolovich said the two sides maintained “an open line of communication”.

“I don’t want to cause grief to this university or this athletics department or this state,” he said.

As of now, the Pac-12 hasn’t mandated any vaccination rule which might result in forfeiture against teams. But if it does pass a rule like that, Nick Rolovich’s decision to not take the vaccine might put WSU at a competitive disadvantage. The Pac-12 commissioner told news agencies that the Pac-12 was leaning towards reinstating old league rules. These rules required schools to forfeit their games if they were unable to field their entire squad.

This policy, Kliavkoff said on Tuesday, is not expected to be finalized until mid-August. When it does, it could leave teams like Washington State, with 25% of its players unvaccinated, at greater risk of an epidemic that would force a forfeit.

At USC or Arizona, two of the four schools where more than 90% of the football team are vaccinated, there is much less concern.

Arizona coach Jedd Fish viewed the vaccine as a competitive advantage and a way for his players to live freely.

What have WSU players said about Nick Rolovich’s decision?

Max Borghi, of Washington state, may have to socialize with his coach this fall, but as Rolovich disappeared from virtual view on Tuesday, his vaccinated star defended his coach’s decision not to do so. vaccinate.

“He’s just shown to this team and the community how much he cares about us,” Borghi said. “During the pandemic, he was helping small businesses. If a place were to close, it would go and buy 140 meals for the team from there. He’s a really good guy, and he really cares about him. I support Coach Rolovich and all of his decisions.

As for his own choice of getting the vaccine, Borghi said, “I think it helps. It has been a long year for everyone, and we will do everything we can to get away from COVID.“ Whether Nick Rolovich’s decision will come back to haunt WSU or not, only time will tell. For now, the coach has doubled down on not taking the vaccine.