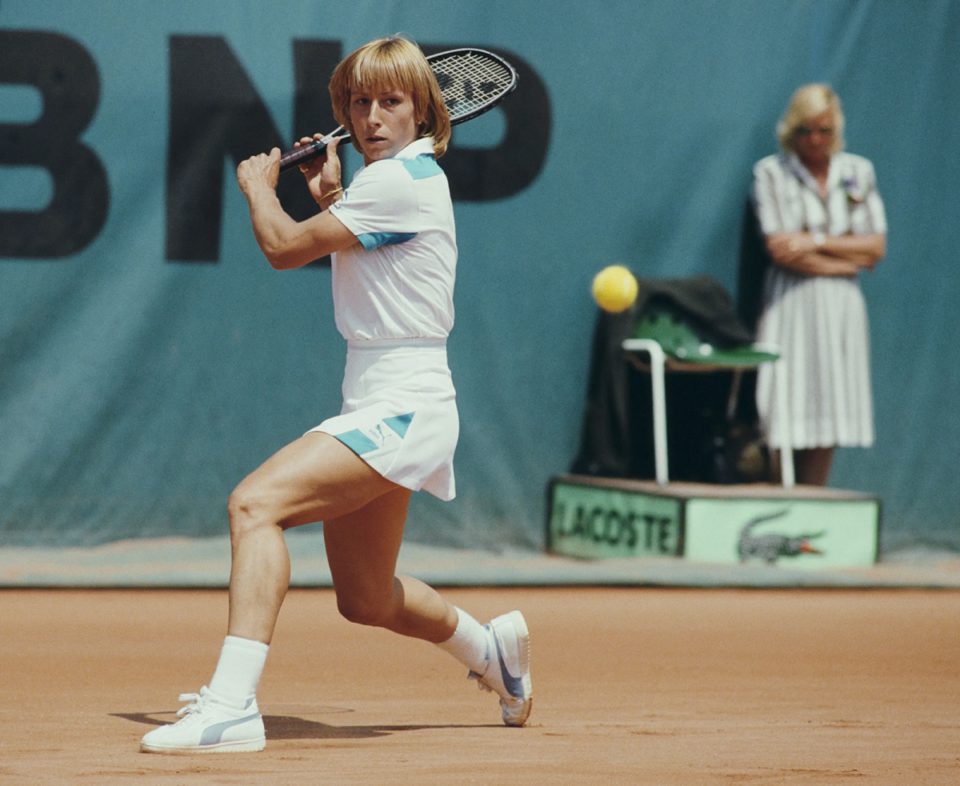 Martina Navratilova has always been a fighter. She fought hard and strong on the tennis court and won a staggering 59 Grand Slam titles (the most of any player in history). Off the court, she has been a very vocal proponent of gay rights. She initially came out as a bisexual woman but eventually reclassified herself as a lesbian. Martina Navratilova also fought cancer and won in 2010. However, the tennis legend has been diagnosed with cancer once again. In this post, we will find out more.

Does Martina Navratilova have cancer?

Navratilova, 66, learned she had a node in her neck during the WTA Finals last November. The tests she underwent revealed breast and throat cancer, both in the early stages of her development. “This double whammy is serious but curable. I hope it works out, although it’s going to mess around for a while, I will fight with everything I have.” the nine-time US Open champion said.

Who is Martina Navratilova?

Few women have loved tennis as Martina Navratilova has done and continues to do, who remained active until she was 49 years old in the doubles specialty after ending her brilliant singles career at 37, after losing the Wimbledon final to Conchita Martínez. She spent 332 weeks as number 1 in the world and was one of the most dominant tennis players of the 70s and the 80s. Her rivalry with Chris Evert, whom she faced in 80 matches, is one of the storied rivalries of tennis.

Even after retirement, Martina Navratilova has continued to be associated with tennis. Together with Evert, with whom she has always had a friendly relationship, she is an ambassador for the WTA Finals, the tournament that brings together the eight best of each season. Even before she won her first ever Grand Slam title in 1975, Martina Navratilova was renowned for her extraordinary technical qualities and unique ability to move around the net.

Married to the Russian model Julia Lemigova since 2014, she left her country of origin early when she felt persecuted for her sexual identity. Even after being a US citizen, she had to face initial rejection from the most conservative sectors of society. She faced prejudice and won, as she would do again in 2010, when she was diagnosed with breast cancer for the first time. Next week she will embark on a new battle with the start of treatment in New York to overcome this most disturbing threat.

When was Martina Navratilova born?

Martina Navratilova, possibly the best tennis player of all time (as far as overall achievements are concerned), was born in Prague, the capital of old Czechoslovakia (and modern day Czech Republic) on October 18, 1956. Her biological father was Miroslav Subert, but in 1962 her mother married Miroslav Navratil, who adopted Martina and gave her his last name.

Martina Navratilova’s biological father suffered from depression and committed suicide after the divorce. Her adoptive father was a tennis instructor and soon began to give Martina lessons, who emerged as a very gifted athlete, also standing out in soccer and ice hockey, where she competed with boys.

At the age of 9, Navratilova began taking classes with the Czech champion George Parma. It became apparent that she was born for tennis and quickly started winning bigger tournaments at the junior level. At 15, she was already the national champion.

At the age of 16, Martina Navratilova turned pro and her life changed radically. Trips outside the country were becoming more frequent, as well as international triumphs. She won her first professional tournament in Orlando Florida in 1974, before her 18th birthday. This same season she won with the Colombian Iván Molina in mixed doubles at the Roland Garros, bagging her first ever Grand Slam title.

How did Martina Navratilova become an American citizen?

In 1975, during a tournament on Amelia Island (Florida), she received a telegram from the president of the Czech Tennis Federation ordering her to return. Martina was still advancing in the tournament and decided to ignore the order of the leadership. She made the decision to request political asylum in the United States and it was granted. She was soon given US citizenship.

In her statements, she stated that it was not a political decision, but exclusively tennis. Alone in a new country, she began to miss her family and especially her mother and sister, whom she knew she would not be able to see for many years. This situation generated great anxiety and led her down a path of excessive eating.

How did Martina Navratilova resurrect her career?

Martina Navratilova gained weight and her results were no longer the same. With 10 extra kilos, she decided to make a radical change in her diet and training. She enlisted the services of Dr. Robert Haas; in the technical part she enlisted Reneé Richards, who was the first transsexual tennis player; and in her physical and psychological preparation, she was joined by former professional basketball player Nancy Lieberman.

Martina’s physique changed, and she became an athlete who intimidated her rivals with her impressive musculature, physical power, speed and agility.

Which coach helped Martina Navratilova attain the most success?

When the team dissolved due to problems among its members, Martina hired the American Mike Estep, a former professional tennis player who had a positive influence on her and further developed her attack, serve and volley. The best years of her career were spent with Estep as her coach.

Martina’s serve created immense problems for her opponents and no woman covered the net like her. With her “forehand” or her reverse slice, she was looking for the first opportunity to get closer to the net to define.

How did Martina Navratilova announce her sexuality?

Martina Navratilova also caused quite a stir when she revealed her homosexuality. She had a long relationship with Judy Nelson, married with children; a relationship that lasted from 1983 to 1991 and culminated in Judy suing Navratilova for a percentage of her earnings during that period.

Most recently, Martina Navratilova married her girlfriend Julia Lemigova in 2014.

How many titles has Martina Navratilova won?

Navratilova’s track record is impressive. She won a total of 59 Grand Slam titles in singles, doubles, and mixed doubles. Of her 18 Grand Slam titles, she won nine at Wimbledon, her favorite tournament. Grass was the ideal surface for her aggressive game. She had a monstrous serve and a spectacular net game. Throughout her career, she won a staggering 167 titles overall, a record in the Open Era.

She lost two Major finals: in 1975 at the Australian Open against Evonne Goolagong-Cawley; and at the French Open the same year against what would be her great rival: the American Chris Evert. Out of her 18 Grand Slam titles, Martina Navratilova won 10 against Chris Evert in the final.

Martina Navratilova also won four US Opens, three Australian Opens and two French Opens in the singles category. In addition, she reached another 14 finals: three in Australia, four at Roland Garros (she lost three against Evert), three at Wimbledon and four at the US Open.

It seems incredible, but Martina Navratilova played 32 Grand Slam singles finals, the last one at Wimbledon (just three months before her 38th birthday).

But if the Czech-American’s career in singles is impressive, in doubles it is even more so. She has won 31 Grand Slam trophies, and lost 6 other finals. Her first doubles title was at Roland Garros, alongside her great rival Chris Evert in 1975.

They both won Wimbledon in 1976. Most of their titles were achieved by partnering with the American Pam Shriver, a tall serve and volley player; together they won 20 Grand Slams. Martina would end her career with nine Wimbledon women’s doubles titles, eight in Australia, seven in Paris and seven at the US Open. She reached six other women’s doubles finals, most recently at the 2003 US Open at almost 47 years of age.

In mixed doubles, she added another 10 crowns, the last one at the 2006 US Open with Bob Bryan, just a month before her 50th birthday.

She played an additional 6 mixed doubles finals. What was admirable about Navratilova was that on more than one occasion she participated simultaneously in the three categories, reaching the final in all of them. A true testament to her great physical and mental condition. As a vital part of the United States team, she won the Fed Cup in 1981, 1982, 1986, 1989 and 1990.

In 1983, Martina won 86 singles matches and lost only once. She ended her career with 1,440 wins and just 213 losses, numbers that seem unattainable.

When did Martina Navratilova become a dual citizen?

In 2008, Martina Navratilova regained her Czech nationality. But she continued to maintain her American one (as both countries allow dual citizenship). She constantly visits her native country; The hostile reception she received in 1986 when she arrived in Prague as a member of the United States Federation Cup team and defeated Czechoslovakia is long behind her.

What is Martina Navratilova doing today?

Currently, she is received in the Czech Republic with all the honors, as a champion of her magnitude in tennis deserves. Martina remains very active in social organizations that help and protect children, animals and in favor of the rights of homosexuals.

She has written some novels, such as her autobiography entitled: “The life and times of Martina Navratilova”. She is still active playing tennis and participates on a few occasions in triathlon championships.

Her last great triumph was defeating cancer in her left breast that was detected in 2010. For 12 years, she stayed completely healthy and kept cancer at bay. However, late in 2022, she developed some nodules on her neck. After conducting the required tests, it was revealed that she has throat and breast cancer. Fortunately, both cancers are in stage one and her chances of recovery are very high. All the tennis fans of the world would like to wish the legend a speedy and successful recovery.

Emiliano Martinez: 5 Reasons He Is Dubbed The Most Disliked Argentinian