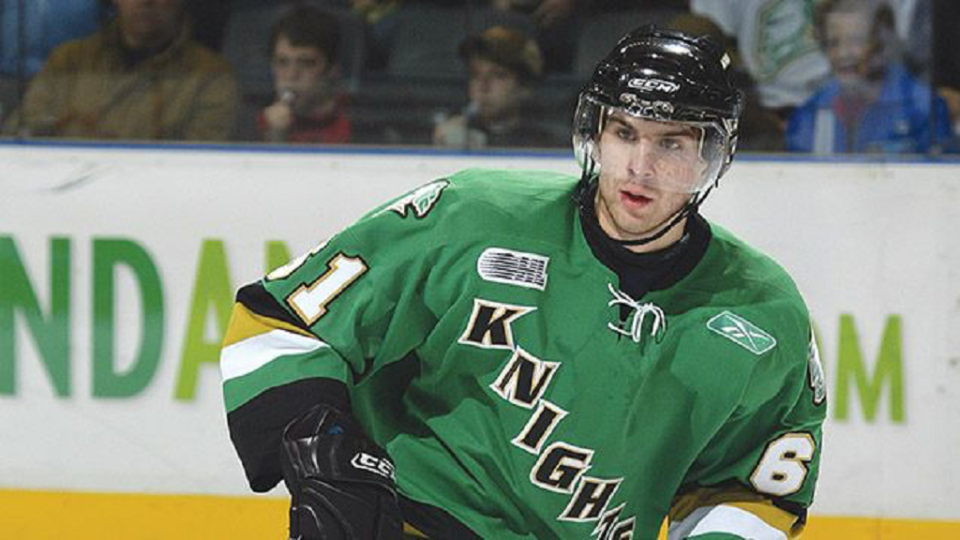 John Tavares (born September 20, 1990 in Mississauga, Ontario, Canada) is a Canadian professional ice hockey player of Portuguese and Polish origin. He plays as a center for the Toronto Maple Leafs in the National Hockey League. Here are some interesting facts about the hockey star’s childhood and rise to fame.

As a young man, John Tavares moved to Oakville, Ontario, where he began playing in the Minor Oaks Hockey Association (MOHA). Tavares also played football and lacrosse at the same time. Due to his combative nature, he often had problems with other players. In Oakville Tavares, he attended St. Aquinas High School.

He lived five minutes from the residence of Sam Gagner, who later played for the Edmonton Oilers in the NHL, among others. Tavares quickly became friends with Sam Gagner. Sam’s father – former NHL player Dave Gagner created an ice rink for the boys in the backyard where they could improve.

3. Junior hockey, and how he became the youngest to join:

Tavares played on the youth hockey team for the Oakville Rangers Minor League Ontario Hockey Association. He proved to be a promising hockey player and at the age of seven he played with older children. From there, he moved to Mississauga Braves, who played the Greater Toronto Hockey League. In the 1998-99 season, he was named the team’s best rookie. The following season, he played in another GTHL team, the Mississauga Senators, and eventually moved to the Toronto Marlboros. At the age of thirteen, he played 16 games for the Milton Icehawks of the Ontario Provincial A Hockey League, becoming one of the youngest hockey players to ever join the junior league.

4. Ontario Hockey League made an exception for him:

Tavares made the request in order to play in the Canadian major junior league Ontario Hockey League, which did not allow for the start of hockey players under 15 years of age. Because of him, a clause was adopted that allowed exceptional hockey players to start a year earlier, and at the age of 14, Tavares became the youngest hockey player to ever sign a contract with the OHL.

The Oshawa Generals team chose him in the first place of the OHL draft. Tavares played his first match at the OHL on September 23, 2005 and scored immediately, just three days after his 15th birthday. Tavares won the Emms Family Award, CHL Rookie of the Year, for his first season in the OHL and was named to the OHL All-Rookie Team.

In the 2006-07 season, at the age of 16, he was selected to represent the OHL league selection in a traditional two-match tournament called the ADT Canada-Russia Challenge. One of these matches was played in Oshawa. On January 25, 2007, Tavares scored 4 goals in one match, scoring 7 Canadian points, scoring 9: 6 over the Windsor Spitfires. At the end of the season, he broke Wayne Gretzky’s record with 71 goals. After the season, he received the Red Tilson Trophy and CHL Player of the Year for the best junior player in Canada.

In the 2007-08 season, he scored 40 goals in 59 games and scored 118 Canadian points, placing third in the OHL standings. Tavares led the OHL in the first half of the season, but then participated in the 2008 Junior World Championships and had to miss several matches in the league. When he participated in the 2009 Junior World Championships, there was speculation about his transfer to the London Knights, who also played in the OHL and, unlike Oshawa, had a real chance of winning the league. Finally, on January 8, 2009, he was traded with Michael Del Zott and Darryl Borden to London for Scott Valentin, Christian Thomas, Michael Zador and six draft picks.

Against Mississauga St. Michael’s Majors, he participated in the CHL Top Prospects Game as the captain of Orr’s team in a 6: 1 victory over Cherry’s team, but in the match he injured his shoulder after a clean intervention by Zack Kassian. On March 8, 2009, Tavares broke the OHL record for the number of goals scored when he beat Peter Lee with his 214th goal.

After Tavares ’72-goal season in 2006-07, Tavares’ agents pushed for NHL leadership and the NHLPA to grant Tavares an exemption similar to the one that allowed him to start earlier in the OHL. However, the attempt was unsuccessful and Tavares had to wait for the NHL draft until 2009. Nevertheless, in October 2007, John Ferguson Jr. offered (General Manager of the Toronto Maple Leafs) Tavares participation in their Toronto Marlies farming team in the lower professional league of the American Hockey League. In the 2009 NHL Draft, he was selected in first place overall by the New York Islanders.

On October 3, 2009, he played in his first NHL game and immediately scored against Pittsburgh goalkeeper Peng-André Fleury. Tavares led the rookie scoring most of the season. In December 2009, they scored 5 goals in 4 matches and equaled the club record in consecutive matches with a goal scored. He finished the season in second place in the rookie scoring behind Matt Duchen of the Colorado Avalanche. In the first match of the 2010-11 season, Tavares suffered a slight concussion at the end of the first period after the impact of Adam Burish. He scored his first hat-trick in the NHL on October 23, 2010, in a defeat to the Florida Panthers, and added his second on January 15, 2011, in a winning game against the Buffalo Sabers.

On September 14, 2011, Tavares signed a new six-year, $33 million contract with the Islanders, until July 2018. After scoring in 12 consecutive games in the 2011/12 season, scoring 21 Canadian points, he was selected for the 2012 NHL All-Star Game. In his first All-Star Game, he scored a goal and assisted. He was also the captain’s assistant for the first time this season.

During the lockout in the 2012/13 season, Tavares played with Mark Streit in Switzerland for SC Bern. Thanks to that, he was able to take part in the 2012 Spengler Cup for the selection of Canada, which they managed to win. Tavares scored 3 goals in 4 matches and added one assist. During the shortened NHL season, he was successful and finished in 3rd place in the league among shooters. On May 10, 2013, he scored his first goal in the playoffs, goalie Marc-André Fleury of the Pittsburgh Penguins, who eventually eliminated the Islanders.

On September 10, 2013, Tavares was named the 14th captain in Islanders history. On February 19, 2014, he was injured during a match at the Winter Olympics and had to miss the rest of the season. At the time of the injury, he was third in the productivity of the entire league.

9. Representation of his home country:

Tavares represented his home country for the first time at the U18 World Junior Championship in 2006.

During his first season in the OHL, Tavares played for Ontario at the World Championships in 2006 to 17 years in Saskatchewan, but did not get a medal. At the end of the 2005–06 season, he participated in the 18-year-old Canadian U18 World Championships in Sweden, but again they did not win any medals when they lost in the match for third place to the Czech Republic. After the season, he was invited to the Canadian junior national team at the Ivan Hlinka Memorial 2006 in the Czech Republic and Slovakia, but did not participate due to an injury.

He was again nominated for the 2009 Junior World Championships in Ottawa and in a winning match 8: 1 over the Czech Republic, he was appointed a player of the match and scored a hat-trick against the USA team. After scoring 12 goals in the junior championships, he equaled the Canadian record of Eric Lindros and Jeff Carter. With the Canadian team, he finally won the gold medal again and was declared the best striker and player of the championship. He was also named to the All-Star Team of the tournament. In April 2010, he was nominated for the Canadian adult national team for the 2010 World Cup in Germany. Canada finished in 7th place and Tavares scored 7 goals and 1 assist in the championship. At the end of the 2010–11 season, he was nominated for the national team for the 2011 World Cup in Slovakia, and here he finished 5th with the Canadian team after losing 1: 2 in the quarterfinals to Russia. Tavares scored 9 points in 5 matches for 5 goals and 4 assists.

Tavares was nominated to the Canadian national team for the 2014 Winter Olympics in Sochi. They did not do well for him and he was injured in the quarterfinal match with Latvia and had to miss not only the rest of the tournament, but also the whole season. However, Canada eventually won and won gold medals.

Woodbine Racetrack: The Legendary Home of The Queen’s Plate