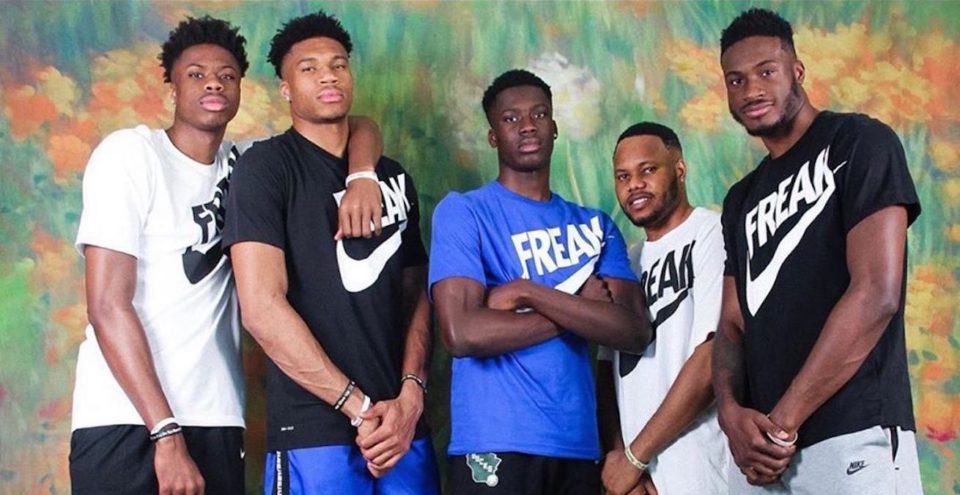 When it comes to a Basketball Association, the Atetokounmpo brothers’ names are bound to come up. However, it is unusual to have grown up in poor Athens & now to be the reigning champion of the world’s most recognized basketball league. Giannis, Thanos, & Kostas Antetokounmpo, the three Antetokounmpo siblings, created history by being the first trio of brothers to win an NBA championship. Francis, Giannis’ older brother, is into football, while Alex, Giannis’ younger brother, is still in the early stages of his basketball career.

Unlike his other siblings, Francis has not progressed in his profession among the brothers. It is up to him to take a different route than his brothers.

It’s a joy to witness Giannis Anetokounmpo with his brothers be so united and positive. This blog goes through the brothers of Giannis in significant detail.

Charles Antetokounmpo had been a Nigerian professional football player who played from 1993 to 2017. He was most famous for being Giannis’ father. Except for Francis, he and the entire family moved to Greece to bring about improvements for the family. His family held him in high regard, however, he passed suddenly in 2017 at the age of 54 due to cardiac arrest. Veronica Antetokounmpo is a famous high jumper from Nigeria. She has five children who are professional athletes, the most famous being Giannis Antetokounmpo. There is currently no information regarding her birth. Both Charles & Veronica are of Nigerian ancestry, yet they have Greek passports. Charles belonged to the Yoruba ethnic group of Nigeria. Veronica belongs to the Igbo ethnic group of Nigeria.

Francis is Giannis’ oldest brother and the least well-known of his siblings, rarely appearing in family photos. He has been the only Antetokounmpo sibling who did not grow up in Greece, having been born in Nigeria in 1988. Francis was placed in the care of his grandparents when his parents moved to the Middle east in 1991. Years later, with the advent of his younger brothers, he was reunited with his family. Francis’ first sporting attempts were in basketball, where he was a small forward for Filathlitikos, a minor local team. In Greece’s semi-pro 3rd tier division, he played for the club’s senior men’s squad. He got his start at football later in life and played competitively as a midfield for one Greek pro team in Greece’s second division. He also enjoys music, and in 2020, he published his first official single.

Athanasios Antetokounmpo, also known as Thanasis, is a basketball player for the Milwaukee Bucks of the NBA. He was born on July 18, 1992, in Athens, just after his parents immigrated to Greece. He is the family’s oldest sibling. In 2008, he joined the Filathlitikos junior basketball squad, and in 2010, he was promoted to the senior men’s team. During the 2011-2012 season, he was vital in the team’s progress to the third tier. His career has taken a drastic turn once he moved to the United States when the Delaware 87ers picked him in the 2013 NBA Professional League Selection. The Nyc Knicks selected Antetokounmpo as the 51st overall choice there in the 2014 NBA draught a year later. It was the start of his rise to fame, with supporters hailing him as the “Greek Freak.” Since 2019, he has been a member of the Milwaukee Bucks.

Kostas, born in 1997 after his famous elder brother Giannis, presently plays for LDLC ASVEL in French Betclic Élite as well as the Euroleague. He maintained his basketball career after relocating to the United States with his siblings, enrolling at Dominican High School & playing his best to a state title. Kostas continued to advance through the ranks after high school, playing collegiate basketball there at the University of Dayton. Kostas filed for the NBA draught in 2018 and was selected by the Philadelphia 76ers before being traded to the Dallas Mavericks. On March 20, 2019, he made his NBA debut in a defeat to the Portland Trail Blazers. Later that year, Kostas signed with the Los Angeles Lakers, and he was re-signed in 2020. He joined LDLC ASVEL within French Betclic Elite and the Euroleague last year.

Alex Antetokounmpo is the baby of the family of the Antetokounmpo brothers, and his career is still in its early stages. He was born in Greece in 2001 and relocated to the United States in 2013 when he joined his older brother with the Milwaukee Bucks.

Antetokounmpo declared in May 2020 that he will follow in his siblings’ footsteps and play for Europe following graduation instead of playing college football. He signed a three-year deal with Spanish basketball club UCAM Murcia CB a month later. He signed with Sacramento Kings for NBA Summer League in 2021. The Toronto Raptors signed him to an Exhibit 10 agreement after he won the competition, but he was released afterward to join the Raptors 905.

Movie on the Brothers

Rise, a new Disney Original, will premiere on June 24. The film will look at how the brothers overcome adversity in Greece to achieve NBA greatness.

Antetokounmpo’s parents migrated to Greece from Nigeria wanting a better life for their family, according to the IMBD movie summary.

The couple works hard to care for the five children, but the prospect of deportation due to a challenging residency system puts their children’s hopes in jeopardy. The family lives together to sell goods to visitors in Athens to make enough money to survive.

The Antetokounmpo siblings vent their frustrations on public basketball courts when the occasion arises. Individually, they rapidly find that, despite their lack of prior expertise, they are exceptionally gifted ball players. Disney remarked in a Tweet before the film’s release: “Brothers and sons. A champions’ family.”

Here are some lesser-known details about the Antetokounmpo brothers

• In 2017, Giannis’ father, Charles, died of a persistent heart attack.

• Giannis & Thanasis participated in the military in 2016, making Antetokounmpo’s three brothers the first siblings trio to receive a chip in NBA history.

The brothers are well-known and successful in every subject they pursue; they are also involved in charities, demonstrating their generosity. Even though they have had a difficult life, they are now surrounded by luxury thanks to their efforts. I hope the brothers continue to flourish in the coming years and achieve new heights.