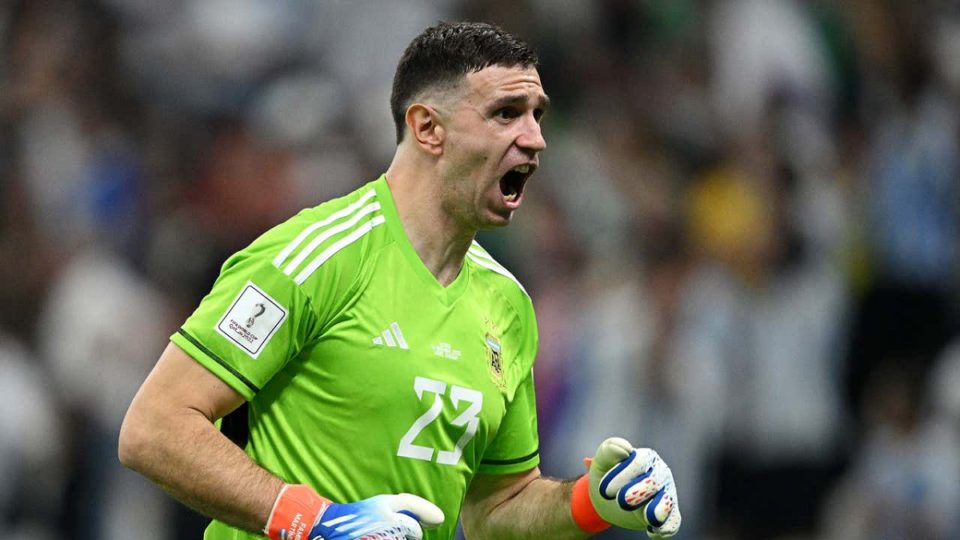 Stunning creator of a good performance and in particular a more than decisive save against Randal Kolo Muani at the very end of the extension, Emiliano Martinez also stopped the second penalty of the French football team struck by the unfortunate Kingsley Coman during the session of shots on goal. But he will also have succeeded in getting noticed during this final for a few gestures that will remain in French memories and perhaps beyond – such as holding a Mbappé doll, during the trophy presentation following the Argentina-France final. Suffice it to say that the Argentinian goalkeeper Emiliano Martinez gave a rather strange celebration that did not amuse Internet users on social networks. Here are some other gestures that can be categorized as strange or even super controversial.

As a reminder, goalkeeper Emiliano Martinez, nicknamed “Dibu” in reference to an Argentine cartoon, was crowned world champion with Argentina against France. Outside of his international career, he plays for the Aston Villa club in the English Premier League, and has 27 caps with Argentina and the South American Football Championship aka Copa America.

1. The latest provocation from the Argentina goalkeeper involves an Mbappé doll:

When the Argentinian goalkeeper Emiliano “Dibu” Martinez went back to Argentina to celebrate the World Cup victory, he exhibited a doll bearing the image of Kylian Mbappé.

French superstar Kylian Mbappé, who slipped him four goals in total on Sunday, in the 2022 World Cup final, despite the defeat of the French team in any case very visibly occupies Emiliano’s mind. On the sidelines of the match, the Argentine goalkeeper (After multiple provocations against the French striker) continues to shamelessly troll the Parisian, almost incessantly, like an obsession.

On December 20th in Buenos Aires, while the Albiceleste returned to the country and shared their joy with jubilant supporters, “Dibu” Martinez ostensibly displayed himself at the top of the double-decker bus with a doll covered with a Kylian Mbappé doll. All under the gaze of Lionel Messi, Mbappé’s teammate at PSG, who did not seem unduly disturbed.

2. The hand scandalizing a Qatari official on the podium of the 2022 World Cup:

The second act on our list took place when the Argentinian climbed on the podium after the meeting, to receive the golden glove, awarded to the best goalkeeper of the competition.

As he had just received his trophy, a golden hand, from Fifa President Gianni Infantino, the keeper placed it between his legs in an obscene gesture. And this, in front of Qatari government officials.

On social networks, the image has been widely circulated and the response has been rather scathing for the best goalkeeper of the competition, reproaching him for his lack of respect for the representatives of Qatar and the opponent or for the members of FIFA.

A debatable title it seems to be now in front of the Qatar officials, the footballer from Aston Villa in England displayed this gesture of rare obscenity, only to have social networks blow up in reactions pointing to the “insolence”, the “rudeness”, the “lack of respect”, and even the “mental problems” of the Argentinian goalkeeper.

3. Then, Emiliano Martinez extended a “minute of silence” for Mbappé:

The third act on our list took place also largely on social networks, where a behind-the-scenes post-match video will once again cause a scandal.

We see the Argentines celebrating in their locker room after the meeting, which will suddenly be interrupted by Martinez himself. The goalkeeper, who one would have thought modest after losing three face-to-face against Kylian Mbappé on penalty, in cold blood, will ask his teammates for “a minute of silence” for the French striker who actually was greeted by the fair play goalkeeper after the final whistle, a sequence that contrasts now.

4. Emiliano Martinez gives us a reason: “I did it because the French booed me”:

At the end of the Argentine victory, Emiliano Martinez had already shown the finesse of his football analysis and all the good things he thinks of the French team in the mixed zone:

“We controlled the match and they equalized with two shots”, stated the Argentinian goalkeeper. “It was our destiny to suffer because we scored the 3-2 goal and then the referee gave them another penalty.”

Let’s forget about the yellow card which went almost unnoticed during the penalty session, when the Argentine goalkeeper tried to intimidate the French shooters, then sent the ball away from Aurélien Tchouaméni.

Emiliano Martinez especially multiplied the provocations during a post-match interview when he was questioned about his provocations and in particular about his obscene gesture on the podium of the 2022 World Cup.

In Argentinian media, in the post-match Emiliano Martinez tried to explain this gesture by the reaction of the public. “I did it because the French booed me,” he argued, who also went on to mock Kylian Mbappé several times as well as Aurélien Tchouaméni.

5. And it’s not over yet because we shift from France to Mexico:

The fifth act is an unfortunate nation of this 2022 World Cup which will also suffer the contempt of Emiliano Martinez several hours later. A second video, widely relayed on social networks, this time shows the Argentines still in full euphoria in their double-decker bus, at the exit of the stadium.

Firing up more South American cohesion around the Argentinian triumph, The wrath of Mexican radio undoubtedly will heat up now!