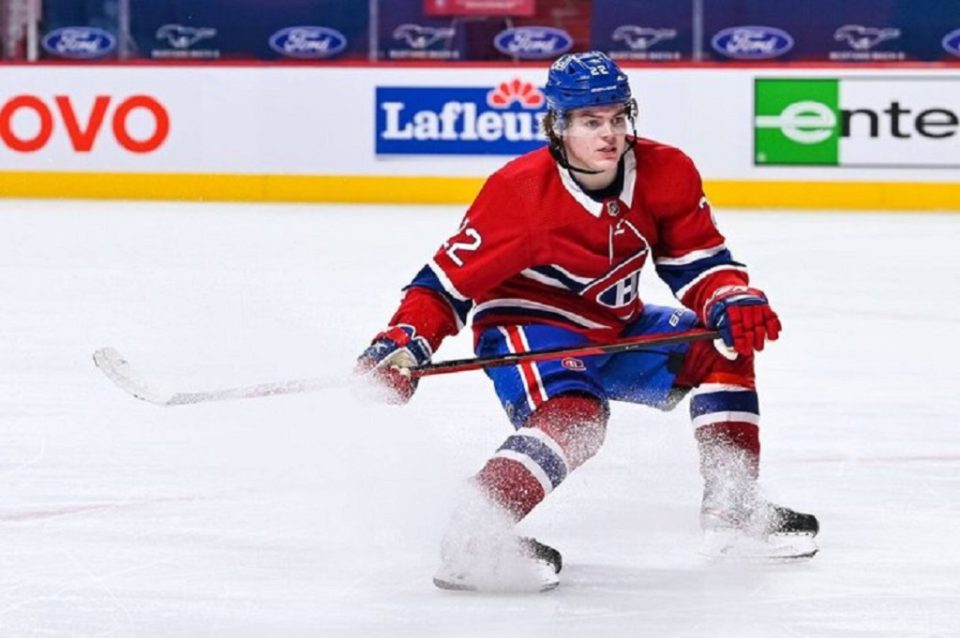 Cole Caufield (born January 2, 2001 in Stevens Point, Wisconsin, USA) is an American professional ice hockey player. He plays as a right winger for the Montreal Canadiens in the NHL. He is nicknamed “Goal Caufield” because of his talent for scoring goals.

Cole Caufield was selected in the first round, in 15th place by the Canadiens in the entry draft in the 2019 NHL.

The day after the elimination of the Badgers, on March 27, 2021, he signed his first contract as a 3-year professional with the Montreal Canadiens. On April 9, 2021, he was awarded the Hobey Baker MVP in the NCAA Trophy. On the same day, he made his professional debut with the Canadiens school team, the Laval Rocket.

He represents the United States.

He participated in his first world championship in 2020.

He won the gold medal at the world junior championship.

He won the silver medal and the bronze medal at the 18-year-old world championship.

His grandfather Wayne is a former junior player, enrolled in the Wisconsin Ice Hockey Hall of Fame. He died on July 13, 2018 in Greenfield, Wisconsin.

His father Paul, who was born in Ontario, is a former player and is the assistant coach of the Badgers. His brother Brock was his NCAA teammate with the Wisconsin Badgers.

Before signing with Montreal, Cole had done a lot for the Badgers in his two seasons

His former teammates and former supporters are all very proud of him.

Head coach of Cole Caufield and the Badgers of the University of Wisconsin during the last two campaigns, Tony Granato is riveted in front of his television set since the debut of the rookie with the Canadian. He believes that what we saw during these five meetings is only a simple extension of what Caufield accomplished during his university career.

“He came to Montreal playing exactly the way he was sold: a striker capable of scoring big goals and a spark plug,” said Granato.

“He brings the energy of his youth, speed and enthusiasm for the fans. The people of Montreal knew they had something special in front of them and he is responding with a great start, ”he continued.

His teammates seem to have been inspired by a new energy since his arrival. Coincidence or not, the atmosphere has completely changed in the entourage of the team, and the Canadian has just lined up three victories.

“As a former player, I can say that every time young legs come into a locker room, it gives a team a second life. We feed on the energy of the young people who arrive. It brings back memories. It’s contagious, ”he continued.

A special skill, Caufield scored his first NHL goal, in a 3–2 overtime

The 20-year-old American had to wait until his fourth game to make the red light flicker for the first time, but the wait was worth it. Caufield played the heroes, scoring the first two goals of his NHL career in overtime.

“This first goal was a perfect indication of who he is: he started the exit of the zone, he picked up speed and made himself available in neutral territory, then he went into the opponent’s zone and threw a shot, ” Granato (his Head coach) described. Many will say it was not a scoring opportunity because the shot came from far away [and missed the mark], but if you look closely, the goalkeeper has moved to one side, while the shot was coming from the other”.

“This is one of Cole’s primary qualities. He has this ability to shoot the puck without the goalie knowing exactly where it will go, ”he added.

“It’s not just the velocity that’s important, it’s also the precision. Cole has a really good shot and he doesn’t shoot them in the same places as the other players.

In St. Louis, Vlamidir Tarasenko had the same philosophy. He was taking a lot of shots. Sometimes he was aiming between the pads, sometimes under the goaltender’s arm, ”explained the Canadiens’ masked man after the team’s training.

Despite his diminutive size, Cole is identified as an elite goal scorer

Obviously, many had expressed doubts about his size. To shine against players of your age, when you have a talent far above the average, that’s one thing. Getting there in the NHL in the midst of colossal beings can be another.

Obviously, this reality did not negatively influence Caufield’s play. Whether out of the zone or in the back of the territory, we have not seen him panic with the puck at the sight of a strong opponent.

“He is fearless and blameless. He knew what awaited him. He’s worked for it his whole life. From the moment he put on the jersey in the draft, his goal was to play for the Canadiens. He made sure he was ready when he got there, ”said Granato.

“I was wondering how the transition would be for him, how the Canadian was going to use him once he called him back. He was quick to demonstrate how he can help the team, ”said Granato.

“Now it’s up to his teammates to learn how to play with him and vice versa. The more games and practices go by, the more his teammates will understand how to give him the puck and where he is on the ice, ”he continued.

His Laval Rocket coach was proud of his first goal

Like many fans of the Montreal Canadiens, Laval Rocket head coach Joël Bouchard was very happy to see Cole Caufield score his first goal in the National Hockey League (NHL) over the Ottawa Senators.

Caufield began his professional career with the school club in Laval, hitting the target three times in two games. So Bouchard got a taste of what the young striker can do, and there was no doubt in his mind that the first goal was coming quickly.

“Everyone knew it was only a matter of time,” Bouchard said.

“He had chances to score. He’s been here for a week, we’ve had a good relationship. He’s a good guy and I liked his reaction after the goal. He is a passionate young man. ”

But beyond the talent, Bouchard argues that such a breath of fresh air can only be beneficial for a club which is trying to get back on track after a difficult month of April.

“He is a very amiable youngster. Right here, you could see he’s a nice guy to begin with. He’s smiling, he’s clever, he treats everyone the same. That’s what I really liked about him. There is a little breeze of freshness. Sometimes guys can get jaded; it’s very demanding to be an NHL player. There are expectations. ”

“Even when he’s not the one scoring, he has a good reaction. He’s living his first moments in the NHL and I think he’s living them to the fullest. “

Last but not least, 20-year-old Caufield is proving to the hockey world that his very good reputation is not overrated, but far from it – “Sitting in the stands and watching the games is one thing, but being able to play and being on the ice is a whole other thing,” he said. I learn new things each time I am on the ice. This is the best possible scenario”.

Most importantly, Caufield looks very well on his way to becoming the player the club and their supporters are hoping for.