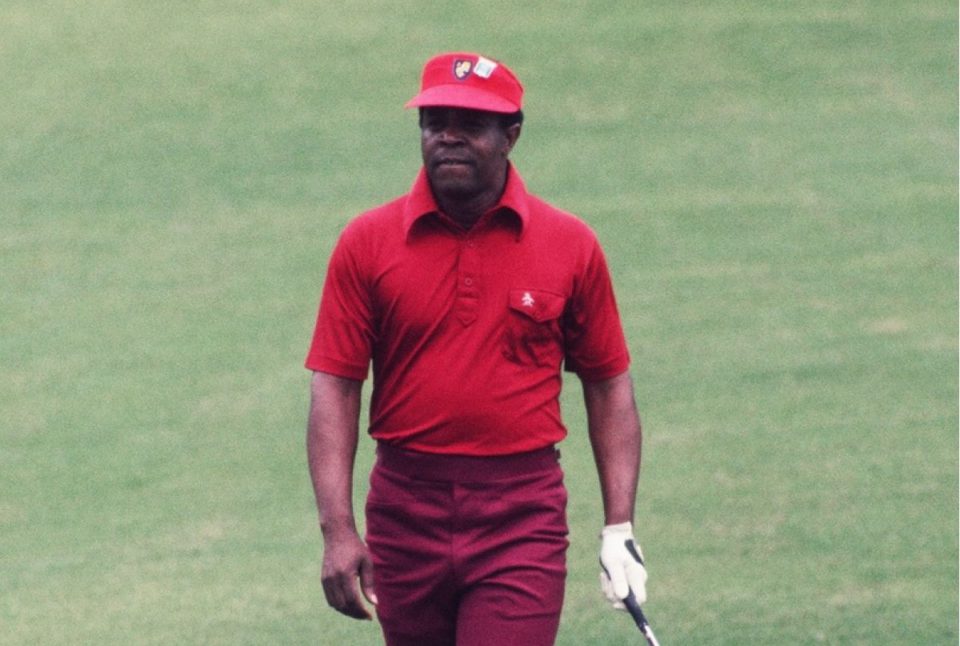 Former golfer Lee Elder, who broke the race barrier at the Augusta Masters in 1975 by being its first black golf contestant died at the age of 87. Here are some things about his life you might not have ever known!

Lee Elder: 8 Achievements That Should Never Be Forgotten!

1. Lee Elder was the winner of four PGA tournaments:

2. Lee Elder was best known for fighting against racism:

He was the first black to contest a Masters, in Augusta in 1975.

Elder, who fought racism throughout his career, in 1975 became the first African-American to compete in the Masters Tournament and paved the way for future generations.

Tiger Woods had the opportunity to say all the good things he thought about Elder’s work when he became the first black to win a Masters: “I’m not a pioneer. Lee Elder, Charlie Sifford, and Teddy Rhodes led the way. I think about them and what they did for me when I attacked the 18th hole. I prayed and thanked them. They are the ones who made this possible for me. “

Augusta National President Fred Ridley also described Elder as an inspiring pioneer whose strength and character in the face of threats motivated other men and women of color to pursue their golf dreams.

The youngest of 10 Dallas-born siblings was orphaned at age nine when his father died in World War II and his mother three months later. The fight to survive began. Lee Elder then proceeded to drop out of college to instead work on a golf course on the simplest of tasks: he would caddy amongst other things.

When he later moved to Los Angeles to live with an aunt, he began to caddy and earn money through it and thus continued to be involved in this sport.

Lee Elder’s first taste came when he got his first stick, the first chance to hit a few shots when the field was already empty. Little by little, between the need to look for a future and the passion for the game that he discovered, he developed into an athlete. In 1967 he entered the American circuit, where he would win four titles, including the 1974 Monsanto Open, which opened the doors of the Augusta temple for him.

4. He was honored in an emotional start to the 85th Grand Slam tournament before he died:

The 86-year-old American shared the kick-off with fellow countryman Jack Nicklaus and South African Gary Player and was greeted with a round of applause in recognition of his place in the event’s history.

“It was one of the most emotional experiences I have ever participated in,” Elder said. “It is something that I will cherish for the rest of my life.”

Elder, who was helped to his feet to enjoy the moment, was unable to deliver any of the ceremonial kickoffs and waved his hand for the standing ovation as he held up his driver.

“The strongest memory of 1975, I have is how nervous I was getting to the first tee,” stated Elder. “I had a wonderful round that day. I received tremendous ovations on every tee and on every green I stepped on.” Lee said that every ovation helped calm him down and he was thus able to go forth with the game.

Jack Nicklaus, for his part, said he was surprised back then that there hadn’t been a black player at the Masters before Elder. “I felt it had been necessary for a long time when he was finally invited,” said the winner of 18 Grand Slam tournaments.

Gary Player, for his part, recalled that he was called a “traitor” in South Africa for inviting Elder to play there.

5. The hardships of his time as a black player:

Winding back the curtains of time, Elder recalled working as a caddy to save enough money to play in PGA tour events.

“That was the only way we black players had a chance to go,” he said. “For a black player at the time, these were tough times.”

“These are difficult times even today, but it was even more difficult to find a good sponsor who would put the money necessary to play on the circuit,” he explained.

They, like Elder, had to face violent threats during their brilliant careers. Such greats shaped future involvements and helped other young blacks who were coming after them.

6. Lee Elder opened a path for athletes like Tiger Woods:

For Tiger Woods to succeed, there first had to be Lee Elder.

It wasn’t until 41 years after the tournament’s inception in 1975, that a very modest-born golfer named Lee Elder broke that barrier.

During a time of strong racial segregation, conflict in the United States, and Black Power, Elder overcame all kinds of obstacles on April 10, 1975, to stand on the same tee from the one where Tiger left in search of glory.

“I remember how difficult it was then, initially because of the classification systems. They let me play the Masters because I won the Monsanto Open in 1974 and that gave me permission, but it was tough to qualify. Secondly, it was also the fact of being black made it even more complicated due to the pressures and complaints that there were. A lot of people didn’t think it was right for a black man to play in a place like Augusta and I received threats for it. Everything was very difficult, everything cost more ”, said Lee Elder during an interview.

The first black player in Augusta was the first to compete in the Ryder, in 1979.

Lee Elder was also the first to be awarded the Bob Jones Award, the highest decoration awarded by the American federation, USGA.

8. Lee Elder had to suffer many prejudices, but he will always be remembered:

Elder remembers when in some clubs he had to change in the parking lot because they would not let him enter the locker room, or when his ball mysteriously disappeared from the street when he hit the first hit, supposedly stolen by some fan who was irritated by seeing him play. Then in Augusta he received threats of death and in fear he had to rent two houses.

Today the world is no longer players vs caddies but we should remember how the brave fought for their place in the world. Lee once stated during an interview how proud he was of Tiger words in 1996 when Lee was in Augusta when Tiger was an amateur, and Lee came back in ’97 when Tiger won.

The veteran player felt so much pride because he knew within him  that part of that had started with other black players who had blazed a trail. Lee Elder and his fellow trailblazers would go on to  serve as an example for Tiger and contributed in many ways so much so that every win is a reward, an honor.